Remembering our cruise to Norway on the Eclipse in August, 2017. Soooo ready to go back! #celebritycruises #celebrityeclipse #geiranger
Not a bad dinner view....can I have one of those yachts please? #fortlauderdale #coconuts
Don't you just LOVE Tigger, Piglet and Eeyore?! #winniethepooh #disneyworld #flowerandgardenfestival

Remembering our cruise to Norway on the Eclipse in August, 2017. Soooo ready to go back! #celebritycruises #celebrityeclipse #geiranger
Not a bad dinner view....can I have one of those yachts please? #fortlauderdale #coconuts
Don't you just LOVE Tigger, Piglet and Eeyore?! #winniethepooh #disneyworld #flowerandgardenfestival
Take me back....#fortlauderdale
We got her home after 6 1/2 months at sea! Now to enjoy a 2 month vacation before heading back. @ErinfromIdaho #celebrityequinox #celebritycruises
That Princess has a big butt.....hahahaha!

Next stop….St. Kitts and Nevis.

Basseterre is the capital of the Confederation of Saint Kitts and Nevis. It is the gateway to popular Saint Kitts beaches like South Friars Bay and Cockleshell Beach. In the heart of the city, Independence Square has an Italian-inspired fountain. Just off the Circus traffic circle, with its Victorian Berkeley Memorial Clock Tower, is the National Museum. In the stately Old Treasury Building, it explores the islands’ colonial past.  And calling it Circus traffic circle is appropriate….it is a pretty crazy place!  Actually, the name comes from England and is a reference to Piccadilly Circus in London. The clock tower was built in Glasgow and dedicated to the former President of the Legislative Council of St. Kitts, Thomas B. H. Berkeley, in 1883.

Basseterre is one of the oldest cities in the eastern Caribbean.  It was founded in 1627 by the French and served as capital of the French colony of Saint-Christophe.  After a turbulent history involving both the British and the French, St. Kitts gained its independence from Britain in 1983.  The city has one of the most tragic histories of any Caribbean capital, destroyed many times by colonial wars, fire, earthquakes, floods, riots, and hurricanes. Despite all of this, a considerable number of well-restored buildings still exist in downtown Basseterre.

Port Zante is only used by cruise ships.  There is a marina close by for other boats.  The Port can accommodate the largest cruise ships in the world.  It is built on a reclaimed 15 acre site and contains many shopping opportunities, including jewelry stores, clothing, rum and the St. Kitts Chocolate Factory.  St. Kitts Chocolate Factory was started in 2007 and uses carefully selected superior organic ingredients to create handcrafted chocolates using the world’s finest Belgium chocolate, butter, purées, spices, and nuts.  To say they are delicious is an understatement! 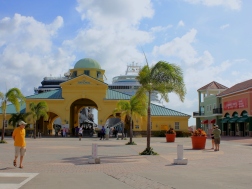 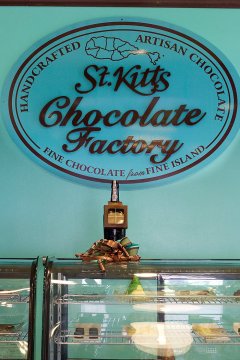 We had a great time exploring St. Kitts.  The city is easy to walk around.  We got a great view of our ship from the top of the bell tower of St. George’s Anglican Parish Church, which was begun in 1856.  The current building is the 3rd church built on this site, with the first being built in 1672 by Jesuit Fathers. https://en.wikipedia.org/wiki/St._George%27s_Anglican_Church_(Basseterre)

Surprises awaited around every corner…even a colorful donut shop! 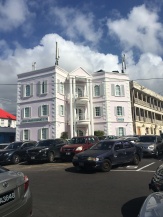 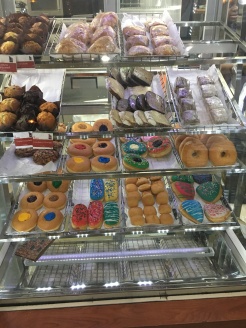 Right by the port, there was a cute red shack, selling wonderful smelling foods and local beers.

Unfortunately, we did not have enough time to explore the town and get to a beach, so I guess that will have to wait till next time!

By zest4travel in Uncategorized on April 25, 2017.
← Celebrity Equinox Review Habits of Seasoned Travelers →