Lerwick is Shetland’s only town, with a population of about 7,500 – although about half of the islands’ 22,000 people live within 10 miles of the burgh.

Founded as an unofficial marketplace to service 17th century Dutch herring fleets, Lerwick took a long time to grow. Because of its illegal status (and alleged immorality!) the straggling hamlet around the shore of Ler Wick (‘muddy bay’) was demolished by order of the Scalloway court in 1615 and 1625. The Dutch burnt the fort in 1673 and the French set fire to Lerwick in 1702.

Most of the sandstone buildings on the waterfront date from the 18th century, although a few, such as 10 Commercial Street, are older. The narrow main street still follows the old shoreline but modern harbour works have been built out in front of shops and warehouses that once stood in the sea. Perched on a hillside overlooking the harbour, the town’s lanes retain their charm – and their shelter from the prevailing south-westerly gales. 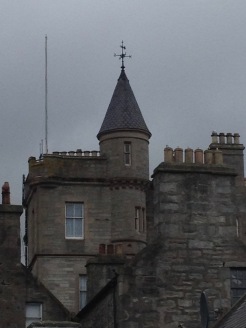 After picking up our prearranged rental car, we hit the road.  First stop…Scalloway Castle.  The castle was uilt by Patrick Stewart, Earl of Orkney, in 1600. It was in use for only a very short time and the castle fell into disrepair after his execution in 1615.  The castle ruins still stand impressively by Scalloway harbour.

The village of Scalloway is on the west coast of the island, a short drive from Lerwick.  We wandered around the village, stopping into the local grocery store.  Oh…how I wanted to have cooking facilities!  The butcher was making some wonderful smelling sausages, but he did not have the ability to cook anything.  Instead, we bought another packet of crisps and ate them on the road!

Off we go to find Sumburgh Lighthouse, Jarlshof and puffins!

Here the Atlantic meets the North Sea and the unique action of tides and wind promote a wealth of wildlife of which seabirds and seals, and occasionally whales and dolphins, are first to catch the eye. The seabird colony is among the most accessible in Britain and is an RSPB Reserve. From mid-April to early-August Puffins are, arguably, its top attraction, often sitting just a few metres away on the grassy cliff tops. 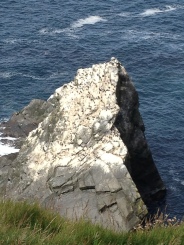 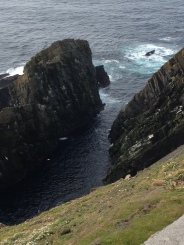 These puffins were just beyond a low rock wall.  There were hundreds hopping around the rocks and flying all around us.

A short drive away, we found Jarlshof.

The earliest remains on the site are late Neolithic houses, followed by Bronze Age houses, two of which have underground passages attached, known as souterrains. These may have served as cold stores. A third souterrain curls beneath the hearth of one of the buildings and might have been for keeping grain dry. Smithing also took place in one of these. A broch was built in the Iron Age: today half of it has been eroded into the sea. The broch was subsequently modified and when it went out of use, at least four wheelhouses were built, partly using stone from the higher levels of the broch. One of these wheelhouses is almost complete and has corbelled cells surviving which demonstrate skilled drystone work.

Jarlshof boasts an impressive Norse settlement possibly originating in the 9th century. The earliest longhouse was in use for several generations, being modified and lengthened over time. The settlement expanded with the construction of further longhouses, barns and byres, but by the 13th century this had been replaced by a Medieval farmstead, comprising a farmhouse, barn and corn-drier. 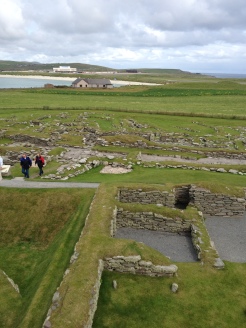 Next to the site, is a paddock holding Shetland ponies.  Shetland Ponies are hardy and strong, in part because the breed developed in the harsh conditions of the Shetland Isles. In appearance, Shetlands have small heads, sometimes with dished faces, widely spaced eyes and small and alert ears. The original breed has a short, muscular neck; a compact, stocky body; short, strong legs; and a shorter-than-normal cannon bone in relation to its size. A short broad back and deep girth are universal characteristics, as is a springy stride. Shetlands have long thick manes and tails and dense double winter coats to withstand harsh weather. 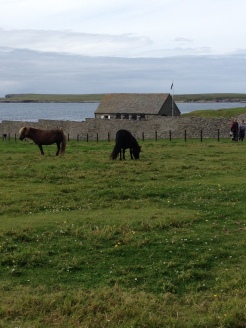 Soon it is time to reboard the ship and head to Norway.  While waiting for the tender boat, we shared some original Scottish fish and chips.  Absolute perfection!