During our Baltic cruise in the summer of 2016, our ship was in port overnight in St. Petersburg.  We planned an extensive two day visit.  Prior to leaving home, we booked a private tour with https://www.insider-tour.com for less than the cruise line offered.  We were also able to have our own transportation, driver and guide.  We saw so many groups of 15 or more (up to 50) people and were so grateful it was just our family of four.  We were able to customize our day beforehand and made small adjustments during the day.  Insider Tours provides the visas necessary to enter the country. Russia was the only country where we needed visas and they can be very expensive and time consuming to obtain on your own.  Our guide met us in the cruise terminal after we cleared customs, shortly after 8am.

The city of St. Petersburg was founded in 1703 on the eastern shore of the Baltic Sea (Gulf of Finland) by Peter the Great and named for St. Peter.  Although just 300 years old, St. Petersburg has a rich and exciting history, full of dramatic events and major historical figures.

We started our day along the Neva river, where we stopped at the Sphinxes and Griffins.  The Sphinxes were discovered during excavations in the 1820s.  At the beginning of the 1830s, they were bought in France on behalf of the Russian Emperor and shipped to St. Petersburg. Carved from pink granite, the sphinxes weigh around 23 tons each, and the great neo-classical architect Konstantin Ton designed their pedestals and the granite pier, with its bronze lamps and griffins.  It is believed by many that if you rub the head of the griffin, it will bring good luck. We also had a great view across the river of the Winter Palace and of the Cathedral of Saints Peter & Paul, which is located within the center of the Peter and Paul Fortress, the historical heart of the city. 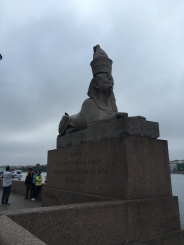 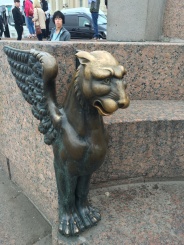 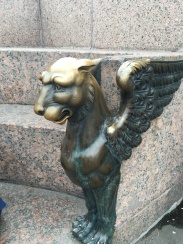 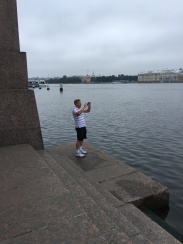 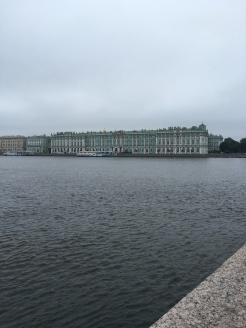 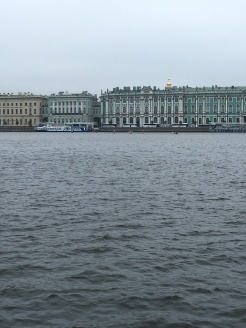 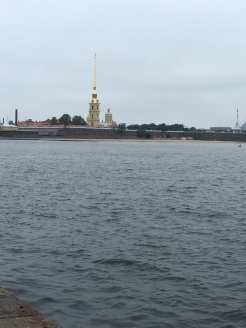 A sight that many on the large tours do not have the opportunity to visit are the Rostral Columns.  For over two centuries, they have formed an integral part of the city’s central panorama over the River Neva.  Once, at this point where the River Neva splits in two, St. Petersburg’s main port was located. During the planning of Birzhevaya Ploshchad in 1810 the decision was taken to install two beacons indicating the two channels.  The large bowls at the top of the columns were originally designed to hold hemp oil for burning. Later, electric lamps were installed as beacons, but this soon became too expensive. In 1957, the Rostral Columns were connected to the gas supply and now, on holidays such as the City Anniversary, Victory Day and New Year, the columns are topped with seven-meter-high tongues of flame. 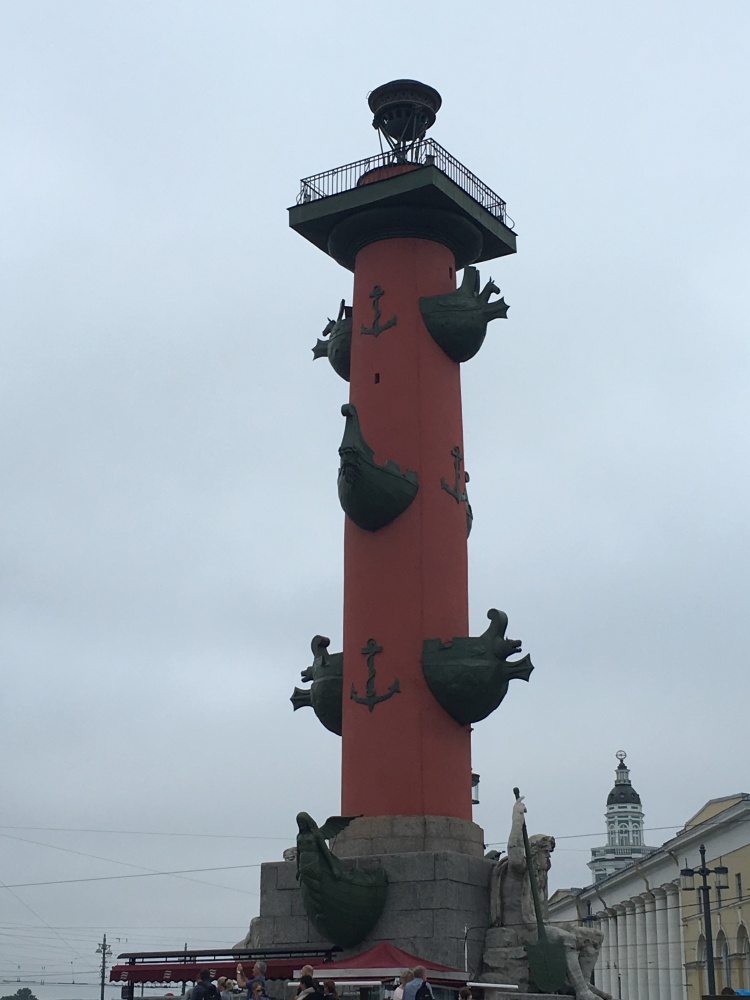 By 10am, we were heading to Pushkin to visit  Catherine’s Palace & the Amber Room.  The Catherine Palace is named after Catherine I, the wife of Peter the Great, who ruled Russia for two years after her husband’s death. Originally a modest two-story building commissioned by Peter for Catherine in 1717, the Catherine Palace owes its awesome grandeur to their daughter, Empress Elizabeth, who chose Tsarskoe Selo as her chief summer residence. Starting in 1743, the building was reconstructed by four different architects, before Bartholomeo Rastrelli, Chief Architect of the Imperial Court, was instructed to completely redesign the building on a scale to rival Versailles.

Outside the main gates, there was a small band performing for us.  It was a nice way to spend a few moments before entering the main grounds. 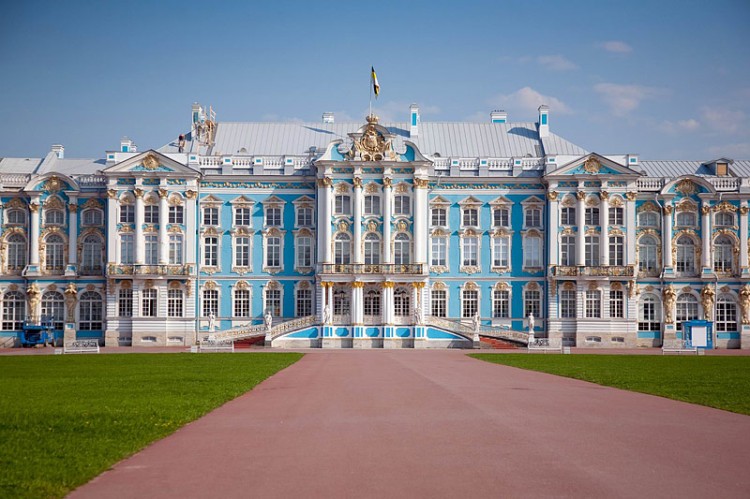 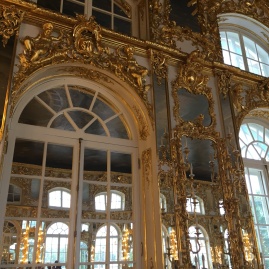 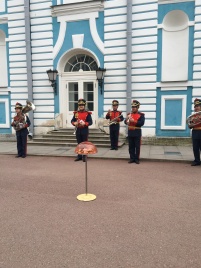 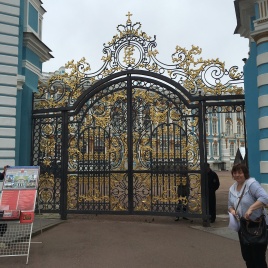 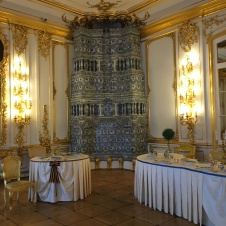 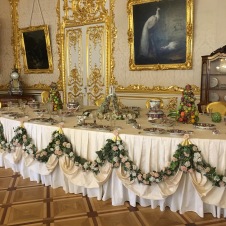 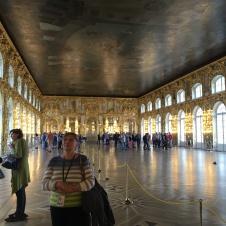 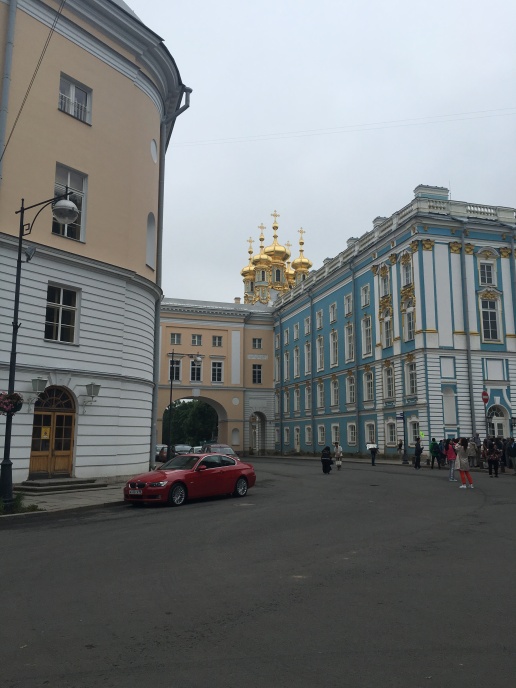 The famous Amber Room was originally supposed to have been an amber cabinet, a gift from Friedrich-Wilhelm I of Prussia to Peter the Great, who admired the work on a visit to his castle in 1716.  But instead of a cabinet, it was decided to use the panels as wall coverings, surrounding them with gilded carving, mirrors and yet more amber panels.  In total, the room used 450kg of amber, and was finally completed in 1770.

In 1941, when German troops took Tsarskoe Selo, the Amber Room was dismantled in 36 hours, and shipped to Konigsberg in a tawdry pretence at historical fidelity. As the Nazi war machine crumbled, the panels were crated up and moved out of danger.   But the room, taken back to the castle where it had originally been created for Friedrich-Wilhelm, was never seen again after 1945.

In 1982, the order was given to begin the recreation of the Amber Room, a process that took over 20 years and cost more than $12 million. It was finished in 2003.

Unfortunately, pictures are not allowed in this room.  I have included a few stock photos. 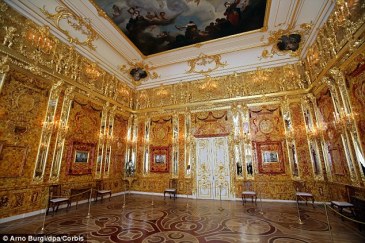 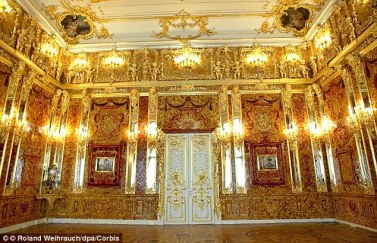 After a lunch break, we traveled on to Peterhof.  I will add more on this tomorrow!